Urolume stents have been taken off the market for about the last year. The stents were a great idea and at least for short strictures, it seemed like they would obviate the need for urethroplasty. Unfortunately they created far worse destruction of the urethra than they ever helped. Data regarding the stents is very curious. Looking back initial reports showed excellent results, but as their use became more widespread it became apparent to most surgeons performing urethroplasty how terribly the stents performed. The stents would often convert a simple short stricture to a lengthy fibrotic defect. In the past, it has been necessary for me to remove the entire Urolume stent and the urethra and reconstruct this in some way. In one case, I can recall I had to use a penile circular fasciocutaneous flap with a dorsal buccal graft. In this case, the fibrosis had completely filled the stent and the urethra was not salvageable.

At the AUA last year I heard a presentation from Jill Buckley, MD from the Lahey clinic in Massachusetts. In this presentation, she summed up the Lahey experience with Urolume explantation, which was very extensive. In these cases, they were able to dorsally incise the urethra and stent. The wires poked out from the incision in the urethra and they pulled them out individually with a needle driver. In these cases, the Urolume portion of the urethra was fairly patent and then a dorsal buccal could be placed to treat stricture on either end of the Urolume. I had not encountered a patient with a patent area of the urolume where the urethra could really be saved, but I had a patient this week who had a urethra that was exactly like Dr. Buckley had discussed.

I was able to divide the urethra just proximal to the urolume, where it had completely stenosed and incise the urolume dorsally. Despite the stent measuring about 3 cm, I had no problem with pulling all of the wires from the urethra. I was left with a diseased but epithelialized urethra, which was wide caliber. I then excised the obstructing scar up to the level of the external sphincter. I then liberally onlayed a 5.7 cm dorsal graft of buccal mucosa and performed an augmented repair with 2 layers ventrally. I was happy with the appearance of this at the end of the operation and I did not have to remove the long segment of the urethra, obviating the need for 2 stage surgery or urethral replacement.

I am very grateful for the great presentation by Dr. Buckley and the Lahey clinic as I would not have had the insight that this simple solution could salvage the urethra in this patient. 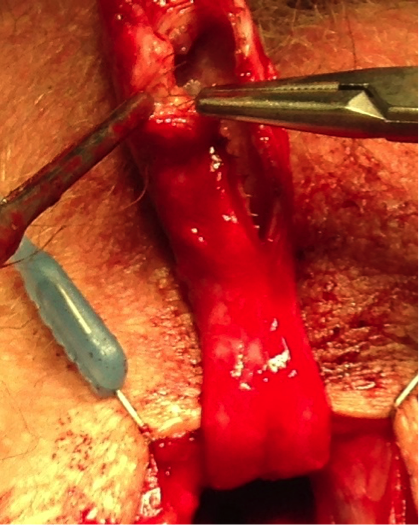 Pulling the Urolume wires from the urethra with a strong needle driver. I had to use a moderate amount of force for just a few of the wires, the rest pulled very easily. It was easy to see when all of the wires had been removed. 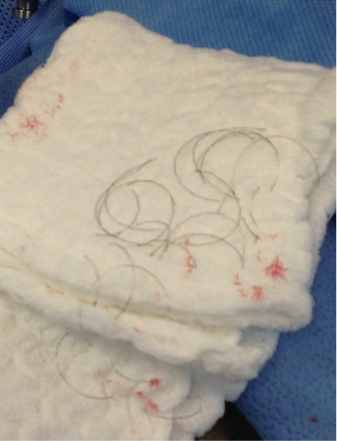 The collection of wires taken from the urethra.